Virginia Loc is a former exotic dancer for She She's, an employed manicurist as Nail Artisan of Manatee County, and the former fiancée to Dean Simms. She is a major character in the series Claws, portrayed by Karrueche Tran.

Diving into a mixed conflict between Desna's Divas and Roller Husser, Virginia gradually integrates into Desna's crew after making an effort to end her affairs and hide her actions; alongside helping the Dixie Mafia in the investigation of Roller's murder, she meets, befriends, and becomes romantically involved with Desna's brother Dean in her integration, having intercourse and eventually discovering her pregnancy.

Reaching a level of comfortability, she consents to marrying Desna's brother and moves into the house as family. Virginia continues to grow in an effort to be more engaged in her friendships with the women as well as providing for her fiancé.

Virginia worked at She She's as an exotic dancer and bunks with Relevance in a shared apartment in Palmetto. She is eventually fired for assaulting a cilent and, soon, taken into Desna's salon as a manicurist while Polly was away in prison.

Arriving at the salon, Virginia annouces her presence, saying that she must have missed the welcome back party. The women eventually disperse and prepare for the day. When Roller arrives at the salon, Desna lets Virginia take over with coating a customer's nails. After a quick sex session in the backroom, Desna returns and converses with Polly and Jenn on making another run of laundering. Virginia tries to intervene, being met with a slightly irritated Desna that directs her in the back. She tells her that if help was needed, it would be asked for and to not interject into business that was not her own. While Jenn and Desna left the shop, Virginia turns to Polly, questioning her on her whereabouts prior. Polly lies, answering that she took a vacation away. A glance down, Virginia sees the ankle monitor on Polly's foot before leaving her be.[1]

When Desna arrives to Roller's new house, Virginia hides behind curtains. After Desna leaves, she engages in intercourse with Roller throughout the night. The next morning, she lies in bed, while Roller speaks to Desna in a call, informing her that Virginia will be there eventually and that the women need to make peace with her.

Upon entering the salon, the women give her a faux greeting. Virginia sits at her station, reading a magazine as Desna stands angrily before her. Unaware of what was to happen, Virgina is knocked to the floor by Desna, being told to leave the salon. Though defiant, she is, then, smashed back into the wall by Jennifer and dragged into the parking lot by her hair. She rests on the ground as Desna scolds her for sleeping with Roller and disrespecting her. Virginia tries to convince them that she was helping but is dismissed and told to leave. Desna warns to stay away from Roller.

Some time later, Virginia and Roller are in deep in sexual intercourse when she begins to cry out, telling him to stop choking her. The two eventually separate when Desna knocks a pot over, alerting them of her presense. Visibly bruised and shakened, she covers herself and scurries back into Roller's house to be clothed. When Desna attempts to drown Roller, he emerges from the pool is begins to punch her before a gunshot rings. Standing shakingly was Virginia, hands clutching the gun before resting her arms to side. Desna turning to her, Virginia asks, "Now, am I in your little crew?"[1]

Hiding the body in a surf-board bag, Virginia and Desna drag the body onto his boat where there is already, another, wrapped body already stashed. After fetching lighter fluid, Desna scolds Virginia for attempting to put Roller's grills in for him. Abandoning the grills on the bottom of the boat, Desna douses Roller's boat in lighter fluid and lights the boat sending it sputtering, on fire, into the swamp. [2]

Even though, the pair agree to meet back up in the morning, Virigina fleas. Only to return, bruised and bloody to Roller's funeral.

Leaving She She's, Virginia traveled alongside Desna to meet with Mandy in Sarasota, where the women learned that Ruval left a casino in Simm's name. While Desna spoke to her, Virginia witnessed as two bikers arrived and took aim at the two, shoving her friend to the ground and lunging forward before a shot was fired. She fell unconscious, bleeding from her head.[6]

Since an unknown amount of time, Virginia has shown to be deeply enveloped in a mindset of making impulse decisions and heavy in using her sexuality to her advantage. Immature, she can be seen in the sights for revenge the moment she is disrespected or dismissed as useless or a nussiance. As the season progresses, however, Virginia shows changes and development, willing to join Desna's crew despite transgressions that originally lead to the women hating her presence. Unlike Polly, Virginia often extend her lies too far, hyperbolizing her stories to the point of giving too many details that can easily leave the crew vulnerable during the investigation.

“Now, am I in your little crew?”
—Virginia Loc to Desna Simms[src]

“I am too cute for prison.”
—Virginia Loc to Desna Simms[src] 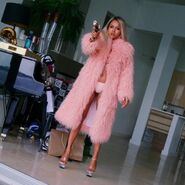 Add a photo to this gallery

Retrieved from "https://claws.fandom.com/wiki/Virginia_Loc?oldid=3824"
Community content is available under CC-BY-SA unless otherwise noted.