Quicksand is the third episode of Season One and the third overall episode of the series Claws. It aired on June 25, 2017 on TNT and became available on Hulu on May 11, 2018.

Virginia's lies deepen as Desna tries to cover their tracks. Meanwhile, Desna is determined to get her dream salon, and Desna and Bryce are in danger of Uncle Daddy's wrath when something goes awry at the clinic.

Resting in the clinic, Virginia relies a story of what happened to her after Roller's death. She tells the Hussers that there was an ambush attack on the estate. The men bagged her head and took her to the swamps, where she was strapped down to a toilet, had peanut butter smeared on her feets, and heard the sound of pigs oinking as they consumed the peanutt butter. After dumping the idea that her capturers had a variety of farm animals, Desna gives Virginia a glass of water, saying that she could hallunicating. A sip later, Virginia changes her story, saying that her capturers had a children's toy mimicking the sounds of farm animals and that they were the ones licking her feet.

Virginia continues on to say she managed to untie the ropes and escape. When asked how she found out about Roller's funeral, she answers that her friend saw a post on Instagram; when asked of the identity of her capturers, Virginia's eyes venture the room, finding Titus on an IV bag and purposely misponouncing the name as Tit-us.

In the car, Desna scolds Virginia on her performance, telling her that everything she has said will be checked for faults and that when it is discovered that she has been spewing lies, they will come to kill her. Examining the bruises and cuts on Virginia's face, Desna continues on to believe she was more than insane in playing the part. Seeing as she would make the situation worse, Desna tells Virginia that she plans to stay a night with her and Dean, driving off to the house. 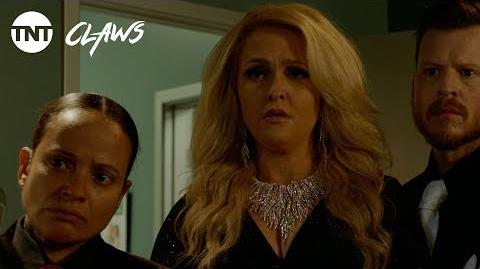 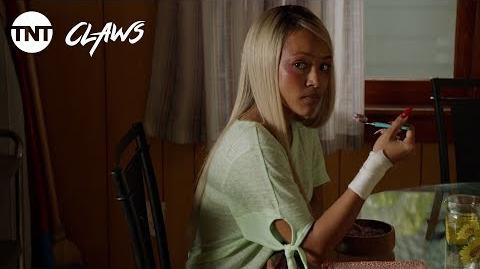 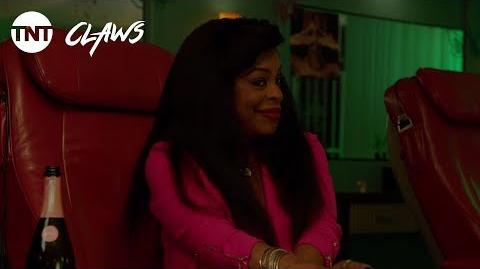 Claws Boys of the Past - Season 1, Ep. 3 CLIP TNT
Add a photo to this gallery

Retrieved from "https://claws.fandom.com/wiki/Quicksand?oldid=3230"
Community content is available under CC-BY-SA unless otherwise noted.