Polly Marks is a friend to Desna Simms, an employed manicurist and preppy con-artist based in Palmetto. She is a major character in the series Claws, portrayed by Carrie Preston.

Released on parole for identity fraud, Polly reintegrates into her position as manicurist for Nail Artisan of Manatee County while straying away from crime as best to her ability. When an old friend visits her and learns of her facade, she dives into temptation and aids Desna and the girls in furthering their goals.

Polly also mothers a young daughter to a neighbor whom attempted to sell her into prostitution and actively seeks a sexual partnership with Kenneth Brickman.

Polly committed identity fraud, stealing funds from many elderly from a nursing house. During the time, she encountered and befriended Sally Bates, another woman that has conned an older man for money. After a while, Polly is compromised, arrested and jailed.

During this time, Desna paid her visits. One visit, she tells Polly that she was right about joining in the operations, saying that one of the doctors had "retired" and that Roller had some sort of dark side she fears. Through the conversation, they tell each other that if something were to happen to them--their life were at risk--they would use the code phrase "ambrosia salad" to mean they needed help.

Returning to Nail Artisan of Manatee County, Polly is given a surprise party for her release. After Virginia's arrival, the women prepare for another busy day in the salon. Roller pays the salon a visit, asking Polly how she was doing.

Reunited with the PastEdit

Much of Polly's personality is positive and upbeat, presenting herself as a "preppy" archetype. She often expresses love and shares her own insights learned throughout her life. She also tends to be a compulsive liar, shown to share untrue stories that skew from her actual background. It is unknown where she picks up her much darker side. Polly can become slightly aggressive and brazen in matters that display her loyalty to her friends and allies; willing to fabricate a crime or blackmail former acquaintances she feels have wronged her.

“Do you want your cinnamon gum, hon?”
—Polly Marks to Virginia Loc[src]

“You don't pay a whore to bang. You pay her to leave.”
—Polly Marks[src]

“I'd rather be bougie than broke down!”
—Polly Marks to Desna Simms[src] 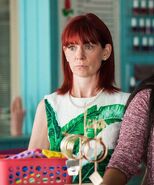 Polly introducing herself to Virginia.

Polly and Ann attempt to restrain Jenn.
Add a photo to this gallery

Retrieved from "https://claws.fandom.com/wiki/Polly_Marks?oldid=3290"
Community content is available under CC-BY-SA unless otherwise noted.