Batsh*t is the fifth episode in Season One and the fifth overall episode of the series Claws. It aired on July 9, 2017 on TNT and became available on Hulu on May 11, 2018.

Desna and Jennifer may be Dr. Ken's only hope, as Bryce wrongly accuses him of a heinous crime. Dean sees a disturbing billboard ad that hits too close to home, leaving Desna to cope with the dark aftermath. Meanwhile, Virginia and Desna are forced to go to Polly for help to rid the world of two horrible birds from Desna's past, with one well-aimed stone.

With a revenge-seeking Bryce speeding down the road with Kenneth in his trunk, he tells him to quiet down. His phone rings, Desna attempting to call him. He does not try to answer, letting it ring as he turns the music louder to mask the screams.

Desna contacts Jenn again, telling her that she cannot reach Bryce and assumes that he already kidnapped Ken. Jenn relies that Bryce is more than likely heading for Edgewood to execute him.

Returning to her apartment, Virginia receives an unexpected visit from Polly, whom presents her with cupcakes. She was asks what she was doing there and demand she leave. Polly lifts a knife, threatening that it would not take much to cut through her before demanding Virginia sit down. Giving her a cupcake, Polly goes on to explain that she has been thinking heavily on the events that have gone on throughout the days, especially over the stories Virginia has been telling everyone. She adds that she can see through the facade of knowing little about what is happening. Polly soon looms over Virginia with a knife, warning her that if whatever Virginia has done leaves Desna sustitble to harm that she would cut her. A toss of the knife into the ceiling, Polly asks her to answer her question on whether she understood. Virginia nods and tells her she understands.

Driving to the house that their foster parents were selling, Desna and Dean approaches during their orientation for potential sellers. Upon first glance, the Coombses presented themselves in a unfamiliar tone, asking if they were interested in purchasing the house. Dean, however, begins to speak his mind, revealing some of the forms of mistreatment and abuse he and his sister endured under their care. This scares away the buyers, leaving the four alone to speak.

Changing attitude, Mrs. Coombs taunts and teases Dean and Desna over the past, especially targeting Dean. Though Desna threatens that she could attempt to report them, Mr. Coombs informs her that the state of Florida enjoys their presence before asking them to leave.

Rallied, Dean begins to pace the walkway, Desna trying to calm and comfort him and reassuring him that they could not do him harm. Though he tells her that they already have and that he was the one protecting her rather than the other way, Desna asks him what did he mean by this. Repeating "don't tell her" and avoiding his sister, he eventually tells her that while under their household, he was sexually assaulted and threatened that if he had told Desna, she would be assaulted as well. In that moment, Dean urinates on himself and constantly apologizes to his sister, who stands distraught over what was said.

Later that day, Desna visits Virginia underneath an overpass. There, she tells her that they are pinning the murder of Roller on the Coombs. Virginia stands confused over Desna's motives.

Mandy visits the salon and speaks with Desna, informing her that Mrs. Choi had reduced the original price of the salon being sold. She addes that Glint Nails had returned to the market, though the price has increased. 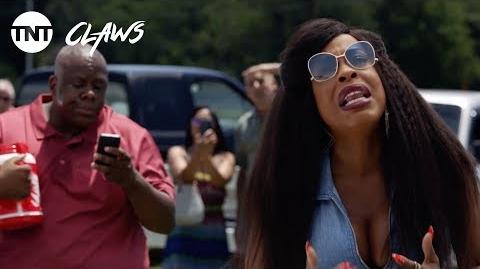 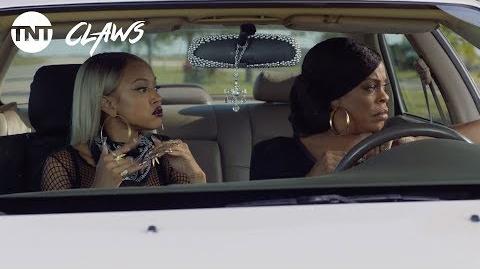 Retrieved from "https://claws.fandom.com/wiki/Batshit?oldid=3784"
Community content is available under CC-BY-SA unless otherwise noted.