Ambrosia is the ninth episode of Season One and the ninth overall episode of the series Claws. It aired on August 6, 2017 on TNT and became available on Hulu on May 11, 2018.

With the clock ticking, Desna is scrambling to get out of her worst trouble yet. Determined, she goes searching for the truth with her crew right behind her, save for Jennifer, who is learning how to cope as a Dixie Mafia wife. When Desna's sleuthing hits pay dirt, she goes to the only person who can save her. Time is running out.

Flashback Desna arrives at Nail Artisan late, relaying to the girls that her car had broken down, her phone service is off due to a late bill mistakenly thrown in the trash, and that she had caught a uncomfortable ride with a man. Polly offers to give her some money through her fraudalent Medicaid schemes, to which Desna rejects, believing it would place Polly in prison. The door bell rings, the man revealed to to be Roller Husser, Jennifer's brother in-law. He arrives for a manicure, being serviced by Desna. When Roller asks if he could refer to her as "D," Desna replies that as long as he tipped big that he was allowed to call her whatever he wanted.

Another day, the women converse about Roller, making comments on how Desna was not sexually attracted to him. Desna rebuffs that she is not attracted to him because he does not have what she needs. Shortly after the women leave the office, the police arrive in front of the store, Ann alerting Polly. As she tries to escape through the back exit, another officer stands idly as he recites Polly's Miranda Rights and drag her to the car. Roller comments that the women were bad.

Relaxing on the couch, Roller and Desna spend some time together. Roller asks about Polly's condition in the prison; she answers that Polly was okay but that she needs to manage to work up $300 weekly to keep Polly protected by a mutual friend from within. Being offered to help with the Mafia, Desna initally declines, leaving Roller to question how she plots to get the money.

The two spend time in the backroom of She She's, enjoying drinks. Desna invests her interests in Roller and his connections with the Mafia. He tells her that he joined the operations alongside his uncle Uncle Daddy, following in his father's footsteeps. Asking her about her family, Desna gives a stern answer, saying they were never around and cheering to foster care. She, then, mentions that she would not count their time in the back of the strip club a date before sharing a kiss with Roller.

Waking the next morning, Desna and Roller find a dressed Dean in the living room. He tells Desna that he was awake because he experienced the same nightmare about gerlims. Desna introduces Roller to Dean, both siblings warning him not to touch Dean. Without warning, Dean panicks, shrieking at the sight of a rat roaming the floor. Desna directs him to the back, as Roller takes a book and smashes the rat.

Present Day Held hostage in her car, Desna drives down the highway with an aggravated Roller in the passenger seat, wielding a gold-plated pistol. 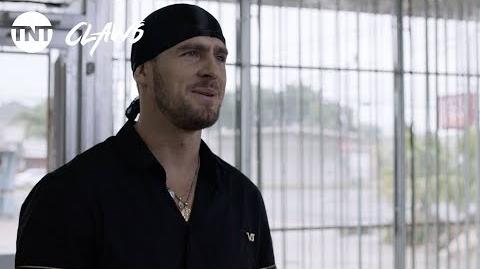 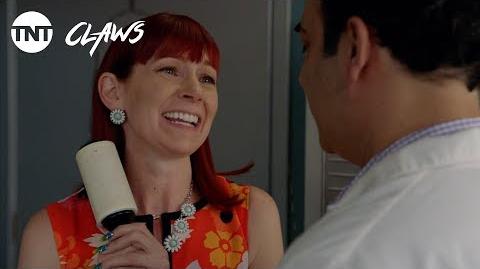 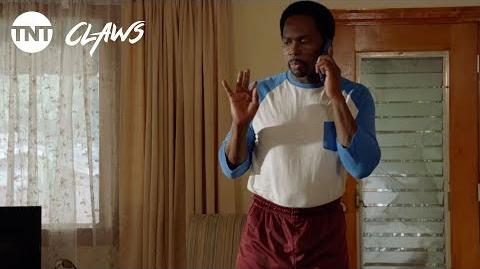 Claws Desna, Dean, and a Goodbye - Season 1, Ep. 9 CLIP TNT
Add a photo to this gallery

Retrieved from "https://claws.fandom.com/wiki/Ambrosia?oldid=3539"
Community content is available under CC-BY-SA unless otherwise noted.